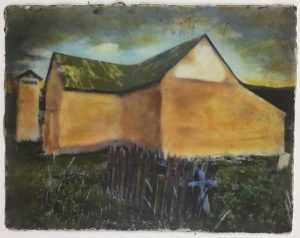 Artist Bio:
Jim became interested in photography in his high school years in the early 1950’s.  He became serious about photography after attending an Ansel Adams workshop in 1969.  He came to Los Alamos in 1971 as executive director of the YMCA. In 1975 he entered the real estate business in Los Alamos and he and his wife Peggy lived and worked there until moving to Santa Fe in 2007.  He has always treated his talents in photography as a “passionate hobby”. He photographs primarily in black and white and hand colors many of his images also adding encaustic (hot wax) for a different visual effect.

Most of his photography is done pro bono for non profit organizations;  Living Treasures of Los Alamos (1999 to present), Cornerstones Community Partnerships (1988 to present), the Historic Santa Fe Foundation (present), as well as others.

Jim has been in many group photographic and fine art exhibitions and has had several solo shows.  He has been published in over 30 magazine articles including work in the “Santa Fean” and “New Mexico Magazine”.  He has been included in 5 books, most notably “America’s Religious Architecture: Symbols for Every Community”. He has had a part in photographic projects with the New Mexico Governor’s Office, the National Endowment for the Arts, the National Historic Preservation Trust and the Smithsonian Institution.

In the past he has been represented in galleries in California, Colorado and New Mexico.