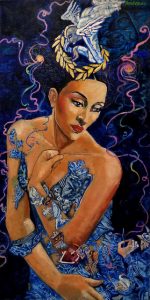 Nolan, Donal. “US artists Emily and Kerry having time of their lives in Listowel.” County Kerry, Ireland The Kerryman Wed 19 August 2015: 24. Print

2015 Commissioned by the city of Charlotte and the Cultural Sector to create a painting of Queen Charlotte to be presented to Prince William and the Duchess of Cambridge in honor of their baby Charlotte.

2018 – Heading a painting workshop in Italy through Il Chiostro

Related Experience:
AmerisourceBergen, 2015. Hired with Jonathan Grauel to create a piece of art on site that would involve their employees and the theme of “Change your View” highlighting the city of Charlotte and key figures. Goal was to work within their budget and time frame while creating a piece of art that would travel to different AmerisourceBergen offices throughout the US and Canada.

Arts & Science Council of Mecklenburg County, 2015 and 2016. Function as a spokesperson from the cultural sector to communicate to corporations the role ASC plays in the lives of professional artists during their yearly Capital Campaign Fundraising Drive.

Was appointed to the Arts & Science Council’s Advisory Council for the Cultural Sector to work with other leaders in the arts to devise plans on how Arts & Science Council can further their goals to elevate Charlotte’s cultural impact and increase arts awareness and education for all of our citizens.

Clariant Corporation, 2016, Hired with Jonathan Grauel to create a piece of artwork that involved their employees in the creation. Our prompt for the design of the art was to highlight color and the many countries around the world that house Clariant offices. We held a workshop where the employees created and cut out shapes that we used in the final piece of art that was unveiled in June 2016 in front of executives from 25 countries.

Completed in July 2017: Collaborative public art commission with Jonathan Grauel through Community School of the Arts to provide 7 area libraries with large pieces of art while working with the communities who frequent the libraries to create shapes that we use in these 3D final pieces.

2018-19 Board Member for the Listowel Fine Arts Festival, Listowel, Ireland.

Currently working on a body of work exploring symbolism and syncretism including the role of women throughout ancient history through today.

Opened Awaken Gallery and The Studios at 107 W Central in Mount Holly, NC