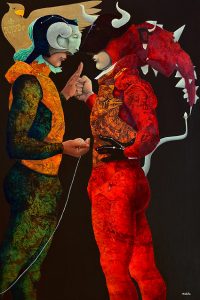 Artist Bio:
Luis Ardila is a Colombian born career artist. After receiving his MFA from Universidad Nacional de Colombia, Ardila split his time between Colombia and France creating art that encompassed his further studies in philosophy and symbolism.

In his own words: “My paintings are framed within the traditional symbolism. That means my personal style has been influenced by twenty-first century syncretism and the school of illuminators and sculptors of the Middle Ages. From ancient times, symbolism has existed as a form of communicating a complex imagery of thoughts and ideas. It is based on matching things that seem to be different in terms of space, time, matter and other defining characteristics, but actually they have equal intrinsic properties and essences so they can be represented by the same symbol. Likewise, the artist, by using symbolism in his artwork seeks spiritual maturation or rebirth through his art. The symbols themselves are the key to enlightenment. Each and every symbol helps to restore the original path of man in this world. The meaning established in the art object is only a reflection of the light which contains the eternal spirit. The symbol in Art, as in Philosophy, is the sum in terms of the soul and body of things created in the universe that reflect the spiritual archetypes.”

Ardila has participated in over 160 group shows and 36 one man shows in Colombia, Europe, and the US. He has also received the top awards in 46 international competitions.

Ardila’s career has spanned nearly 40 year with over 160 small group shows and 36 solo shows throughout Colombia, Europe, and the US. His work has received 48 top awards internationally not only for his tremendous skill but because of the layers of deep meaning he infuses in each piece.

“The work of Ardila awakens memories of some of our greatest artists (Zsyslo, Tamayo, Obregón and Roda), in the treatment of the textures and in certain way of using the oil and the color, as well as in the use of symbols of the Roman and the Gothic, but these references do not obscure or encumber the gestation of his own language that he has been creating.”

Ardila will be on hand in Santa Fe to discuss his work in the Awaken Gallery booth.

Awaken Gallery represents contemporary artists who use mythology, metaphor, syncretism, and storytelling to equate our past with the present. Our mission is to help teach lessons from the past in order to move forward in a better way.