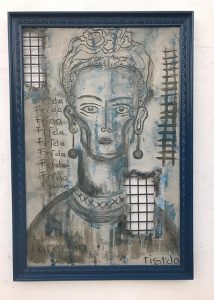 Artist Bio:
Ricardo Cardenas-Eddy, born in México, is growing his career as his exhibitions and rising popularity demonstrate. Cardenas-Eddy expresses feelings and beliefs connecting his Art in media and technique with his career as construction engineer, cleverly using building materials, concrete and steel bars, as his artistic media. The New Own Free Style by Ricardo Cardenas reached a peak with his Series of Tributes to Great Masters and the Series of The Muses of Ricardo, as the Artist opened a new path for the Visual Arts that transcends time and space, conceiving a new way of celebrating Art History and a novel manner of innovating the media and techniques to depict it. The My Muses Series, inspired by the seven Art Muses created by Zeus in Greek and Roman Mythology that guided Classical culture and the thinking of humanity for centuries, encompass seventeen one of a kind sculptures, each different from the other, representing a Cultural or Human concept defined by the Artist. Made in cement and steel bars, they appear as dig out from a cement block or wall. Each base, on which they stand, has a color representing the wall from where the piece came. The sculptures depicted in human scale to obtain a closer approach to reality, don’t have a race, gender, or age, to eliminate stigma. They are distinct in color and technique, finished in wood, metal, resin, paper or paint. Themes and names are diverse, as the language for each title. The Artist’s goal is to transmit a Universal Message. His Series of Tributes to Great Masters reinterprets main traits of the ART from master artists. Cardenas-Eddy brings them to our present time, making them his own. Ricardo paints and adds collages for the whole to look like a unique poster or street graffiti on a cement wall. These Artworks are greatly admired by viewers and Art Collectors. Using the Tic Tac Toe game he tells that Master Art is for all people, popular and accessible as a worldwide played game. Presented by Contemporary Art Projects USA in 2016, Cardenas-Eddy had a Solo Show at MDC West Campus Gallery, Doral. At Red Dot 2017 opening, he sold El Juego de las Fridas. In 2017-2018 at Art Palm Beach and Art Boca, where in 2017 he sold two Artworks daily. In 2018, participated at Art Santa Fe, the Pre-Art Basel Miami Week: ART from Our Earth, the Sea and the Sky at the ArtsPark Gallery of the City of Hollywood, FL. During Art Basel Miami week 2018, Cardenas-Eddy participated at Scope, a Solo Show at the Delano and a Group Show at SLS, among others with relevant sales to art collectors, like the famous designer Steve Madden from New York, and was commissioned a mural for the Delano Hotel. This October opens a solo show at MDC West Campus Gallery, Doral. In the Contemporary Art Projects boot at Art Santa Fe 2019, Ricardo Cardenas-Eddy presents his painting The Frida’s Wall from the Series Frida’s Paredon inspired on the last moments of her life.