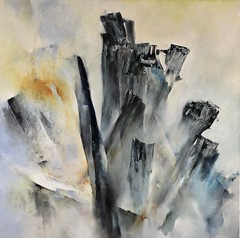 Artist Bio:
I grew up in Tacoma Washington where fog heavy mornings were scented with salt water and arsenic; salt from the Pacific waters, arsenic from the pulp mills. In the 1960’s logging trucks could still be filled with a single, 12 foot diameter Douglas fir.

In the 70’s I began a slow migration toward adulthood studying at Cornish Institute for the Arts in Seattle WA. A few years later I headed to Paris France where I earned my degree in theater arts from L’Ecole International de Jacques Lecoq. I co-founded Theater Grottesco and toured Europe and the U.S. until the mid 90’s, performing original plays, teaching, and learning to see.
Detroit MI was home base in those days and I was in my mid 30’s; adult enough to have a fledgling vision. On tour breaks I would set up the easel and paint. My work was fueled by summer tornados on Lake Michigan, castles in Eastern Europe, race riots in California…a rapidly expanding collection of life impressions.

In 1996 I relocated to Santa Fe New Mexico and all painting ceased. The muse slept. I made theater… I made shoes, studied law, worked in hospice care, wrote an opera, two-stepped in cowboy boots…I landed at New Mexico School for the Arts as a theater instructor until finally, the muse woke ravenous for canvas and paint.

My art reflects a universal humanity; the need for meaning, and the conflict that need inspires. My work is unplanned. It arrives like a messenger from an un-named country. I never know what a canvas will deliver.

Additional Info:
My style evolved from the theatrical stage. Painting, like theater, tells the human story. As a theater artist, I’ve often called on abstractions such as color and texture to convey character. My paintings are similar attempts to capture the “landscapes” of human experience. These are explorations; adventures into that which eludes description but is somehow universally familiar.
I am intrigued by how little of our more meaningful life experience can be framed by words. The wellspring of thought and emotion that is unique in the individual and common to us all is the thing I am after. My work is an attempt to reach into the depths and name fragments of the “universal consciousness” with gestures in color, movement, shape, and texture.

I approach the canvas with a feeling rather than an image or idea and the result is abstract. What emerges tends to evoke a sense of sacred place; a world where the elements are in dynamic interaction with human design.