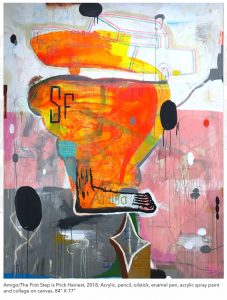 Artist Bio:
Born in a taxi on Yoyogi Street in Tokyo, Japan, John Yoyogi Fortes is a Filipino-American painter based in Sacramento. His paintings are often large scale explorations of self that lean towards a whimsical, dark and obscure world.

Fortes’ artwork has been exhibited throughout the U.S., Hawaii, Venezuela, Japan, the Philippines and Norway. His paintings are held in numerous private collections as well as the Asian American Art Centre in New York, the Nevada Museum of Art, the Triton Museum of Art and Crocker Art Museum in California. His work was included in the International Arts & Artists traveling exhibition, “Infinite Mirror; Images of American Identity.” The exhibition opened at Syracuse University in New York and traveled to museums and universities throughout the Eastern United States.

Fortes has received grants from the Sacramento Metropolitan Arts Commission and a Visual Artist Fellowship from the California Arts Council. In 2004 John was awarded a Joan Mitchell Foundation Painters and Sculptors Grant. John was also nominated for the Alliance of Artists Communities, Vision from the New California Project in 2006 and 2007.

Aside from painting, John is also a videographer and has collaborated with the California Association of Museums and the Crocker Art Museum in Sacramento producing videos of Bay Area artists, Travis Sommerville, Mel Ramos and Austrian artist, Gottfried Helnwein. Currently he is working with the Crocker Art Museum on their Block by Block initiative based on community engagement and funded by the James Irvine Foundation.

Recently John completed the renowned Artist-in-Residence program at Bemis Center for Contemporary Art in Omaha, Nebraska, and has recently been awarded a Joan Mitchell Foundation Residency for 2019.

Look for John’s solo exhibition at the gallery in October, 2019.