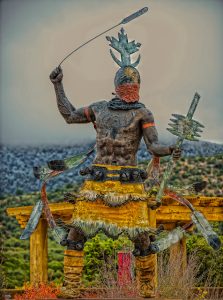 Artist Bio:
Over the years, Joseph Cosby has been featured in solo shows, galleries, and museums in Washington DC, Bellingham Washington, Dallas Texas, Steamboat Springs Colorado, Antigua Guatemala, and Santa Fe New Mexico. His works are found in collections in the US as well as overseas.

Joseph started his work as a photographer in the late 60’s for an arts magazine in Princeton, New Jersey.. He sold his first work in 1969. By the early 70’s he changed from B&W to color and then in 2017 came back “home” to black and white on canvas.

With the loss of his right eye in 2007, it appeared that Joseph’s career in photography was coming to an end. Instead, he found that it had only just begun as he found a completely new focus and vision. Twelve years later this culminated in the work — “A Roll of the Dice, A Flip of the Coin”, a project spanning five continents and 50 years of searching, listening and capturing the stories of lives so different from his own.

HIs formal training in the arts and photography is a short journey. Joseph was never to take an art course beyond the sixth grade, has never taken a course in photography, was never the apprentice of another artist, had no mentors, and claims he is “too old and not smart enough to use Photoshop or its derivatives.” Rather, he continues to rely on those techniques, of an earlier era, employed in the dark room.

Joseph’s academic studies resulted in a MA from Columbia University in New York and advanced studies at the Institute des Sciences Politiques in Paris. While an undergraduate, he had a music scholarship for voice to pursue a career in opera.

In a past life, he enjoyed a career as a consultant for state and federal governments with clients ranging from New York City Police Department, the city of Washington DC, Virginia Department of Corrections, and the Department of Defense. When not traveling off the beaten path with his wife, Sheila, a tenured professor and ornithologist (a world-traveler in her own right), his home is Santa Fe, New Mexico, with their Standard Poodle, Mondo.

For the first time in 50 years behind the lens, Joseph Cosby will release his black and white collection on canvas “A Roll of the Dice – A Flip of the Coin” that will be featured at the Santa Fe Arts Show. This is a departure from his oils on photography canvases that have shown in galleries across the country.

While basically an international portrait photographer as well as a member of the International Press Corps, his travels have taken him to hamlets and villages not found in most travel books to witness the struggles as well as dignity of those less fortunate.

Additional Info:
Spirit Dancer was just standing there several years ago in one of those O’Keefe moments when the fog was lifting and the light was so unusual that I could hear the pounding of feet to rhythms of long ago. Once printed, I added oils to enrich the grain and provide dimension.