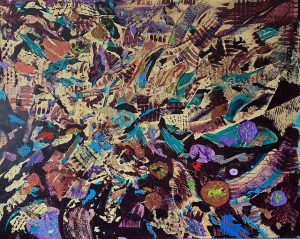 Artist Bio:
Sheila’s path to painting went the long way around. After graduating from Stanford Law School at the age of 32, she practiced law in SF, DC and NYC. After 20 years of that, she made a sharp right turn. In 1998, at age 54, she graduated from the Smith College School for Social Work and took up practice in DC as a psychotherapist. She continues in this work even today, specializing in the treatment of adult survivors of childhoods marked by severe neglect and abuse. Aged 72, finding herself with some free time, she decided to see if she could paint. Results were favorable. She has produced over 100 paintings, and has exhibited in DC, Lewes, DE and other venues. Cahill abstracts hang in homes in New York City, Colorado, throughout the middle-Atlantic, as well as in The Hague and in Trinidad and Tobago.

Additional Info:
While most of Cahill’s paintings arise in a matter of hours, or at the most, a day or two, the complex piece that became Party Animals took weeks to emerge. Cahill explains that she rarely begins a canvas with an end result in mind. Party Animals was no exception, and its first iteration was a big, colorful joyous rendering of happy shapes (animals? toys?) that found favor with many viewers. But then, a friend with a deep education in fine art said ‘It’s not a painting yet.’ With only that cryptic remark to go on, Sheila kept on painting. Off and on, for days that stretched into weeks. Several versions looked almost good to Sheila, then not. After about a month, Sheila concluded that this canvas was simply never going to quite gel. Time to strip it to the bone. Red-handled paring knife in hand, she stripped away images, swathes of color, stripes of tissue, chunks of painted shapes that had been glued to the surface. (She says this was actually a lot of fun.) Soon, the canvas was 75% nude and Sheila found herself ankle-deep in colored strips, and painted bits and twisted paper. All of which turned out to be gorgeous in their own right. Bemused, almost entranced, Sheila began applying the bits here and there across the shorn areas of the canvas. In this way, over a few hours, Party Animals revealed itself. Out of its destruction it arose whole, full of life, thick with meaning. As is the way with life, the artist maintains.

Artist Statement:
My painting is about energy. When I begin a canvas, I almost never begin with intent. I begin with paint. Then more paint. Soon, the paint is in charge of what happens next. I am usually more of a paintee than a painter.

In my earliest paintings, cosmic energy dominated. Then biological life began to crop up. Canvases that had been all about roiling space began to teem with signs of pre-life, then life itself, with (mostly small) creatures swimming, crawling, flying about. Soon it seemed that many of these lively creatures had a goal. They were heading with dispatch toward somewhere in their painting that looked like a whirlpool or a portal. A place leading to another place, behind the scene. A parallel universe? They never said.

Then again, I have lot of paintings that do not fit neatly into any one theme. Some are characteristically fully abstract, some reveal shapes that you’ll never find in nature. All are welcome in my studio.

Two things all my paintings have in common: large amounts of energy/shifting/transforming and plenty of gorgeous color.

Press Release:
One of the nation’s oldest ‘emerging artists’ will be exhibiting her abstract paintings in the SOLO section of Art Santa Fe 19.  Sheila Cahill (now 75), a DC-based abstract painter, first picked up a paint brush when she was 72.  ‘I had some extra time on my hands,’ she says, ‘so I decided to see if I could paint.’  As it turned out, she could.  Cahill’s canvases burst with energy — cosmic, biological, transformational — reflecting her sense that everything in the universe is moving, nothing stays the same.  Sheila has proceeded, without formal training in art, to create a remarkably diverse and sophisticated  body of work comprising over 100 paintings, and reflecting several painting styles.  The painting  titled “Party Animals” is one of her larger paintings (4 feet high and 5 feet wide). Seen from a distance, the canvas appears to show an explosion of life forms emanating outward from a central point.  Viewed from a closer vantage point, one sees that the busy life forms are converging on that same central point, which may be a portal to another universe.  ‘I’m not sure where they are headed,’ Cahill states.  ‘They never said.’ 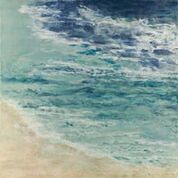 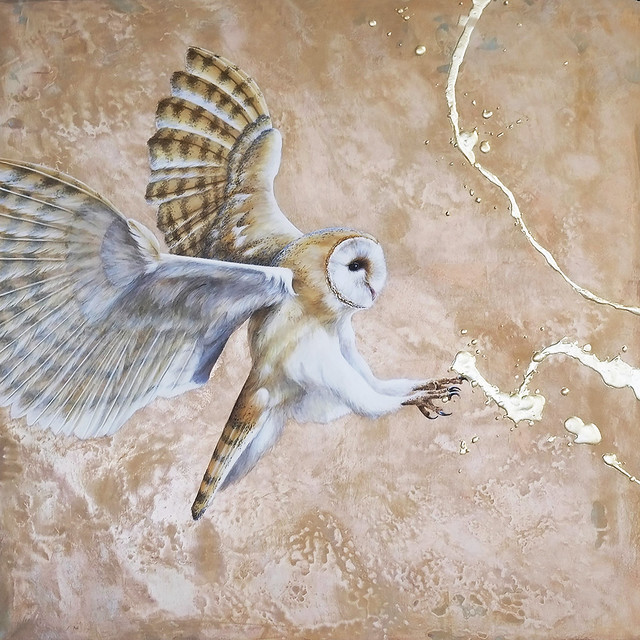