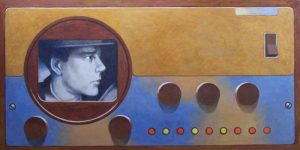 Artist Bio:
Rex Barron – Rex Barron’s career as a character layout and background artist for Hanna-Barbera Filmation and other Los Angeles animation studios exposed him to working on well-known television projects including “He-Man”, “The Smurfs”, “Fat Albert”, and others of that time. He went on to illustrate seven picture books, including “Eggbert, the Slightly Cracked Egg”.

Barron creates satisfying figurative compositions to convey a story. Rex merges his background in animation art with his mind’s eye to tell his own stories in imagery that is visually pleasing and thought provoking. His works have been featured in MasterWorks of New Mexico, and his oil painting titled “Unmutual” was awarded the Carol Bryant Award for Creativity in 2019.